Ink painting that is called Suibokuga in Japanese.
Suibokugo is Japanese monochrome ink painting. Everything is painted in black India ink . It was first developed in China and taken to Japan by Zen Buddhist monks in the mid -13th century.Japanese ink painting reached its height in the Muromachi period (1338-1573)It was perfected by the priest and painter named Sesshu(1420-1506?)during this era . His paintings are characterized by the use of simple, bold brush strokes.He tried to eliminate from his paintings all but the essential character of the subject. Many ink painting artists followed his style. 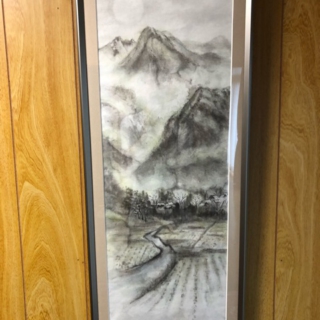